Among Morocco’s imperial cities, Fez is considered the oldest. It has also served as the country’s capital for up to three times in the past. While many of its landmarks are said to be dated to the 13th/ 14th century, when the city was said to have been very influential during the rule of the Marinids, it is recorded that it was founded in 789, by the first sultan of Idrisid dynasty.

Now we see that Fez is one of Morocco’s respected cities and around the world, it is regarded as the center for traditional artisans and artists. The city has three sections, which are the original old town known as Fes el-Bali; Fes el-Jedid, which was built when the city had an increasing population in the 13th century; and finally the present-day Ville Nouvelle quarter.

When we talk about things to do in Fez, aside from tasting the delicious cuisines of the people, there is also the part of visiting important landmarks that make Fez stand out from other Moroccan cities. Therefore, in this article, we will be talking about things to do when we refer to those places you must visit while in Fez. 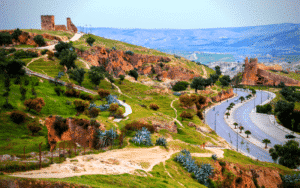 Here, you will find accommodated, the remains of past sultans and royals of the Merenid dynasty. It might not, however, seem to be all in order because of the fading of some decorations over the years, but the architecture still stands out. You can try climbing up the hill especially during sunset and catch a beautiful view of the 1200 years old Medina. Do not stay up till dark to avoid the difficulty of descending.

You will find the Al-Attarine Madrasa near the Al-Attarine Souk, a market containing a variety of dried nuts, local spices, among other things, and the Al-Quaraouiyine Mosque. This Madrasa served as an annex to the Al-Quaraouiyine and was made with the same design. It has beautiful blue and green zellij tilework, classrooms indoors, carved plaster and cedar and a courtyard fountain.

3. Grasp a view of the beautiful Dar el Makhzen 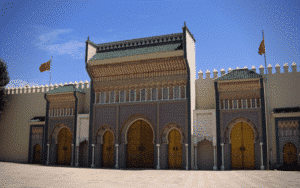 This is the beautiful Royal Palace of Fez and it is worth the visit although it is not open to the public. It is maintained by the royal family as it is in every other city, however, they do not stay there. It is a sight to behold because of its very gigantic doors made of gold and brass, with carved cedar wood and zellij tilework surrounding it. Tourists are fond of this place as it can serve as a lovely spot for taking beautiful pictures.

4. Enjoy the Atmosphere of Fes el-Bali

This old town of Fez or also known as the Medina is a World Heritage Site of the UNESCO. It is one of the best-preserved sites of the Arabic/Muslim world. It has narrows streets like that of a maze, souks in line with shops having an interior like that of Aladdin’s cave and scurry squares; this makes it one of the world’s largest urban zones for pedestrians. Do not forget to enjoy the view of architectural designs in the surrounding shops and alleys and the donkey carts moving around.

5. Experience the Living History of the Quaraouiyine Mosque

Thus, I would say is the city’s most famous building as it is home to Al-Quaraouiyine University. It was founded in 859 and is regarded as the oldest non-stop functional university in the world and is the primary center for Islamic learning. The Quaraouiyine Mosque is currently one of Africa’s largest centers for worship and can accommodate up to 20,000 people during prayer. If you are not a Muslim, I would advise you to stay away as it is restricted to just Muslims. It has a library that is one of the oldest in the world and among its tomes is a 9th century Quran. 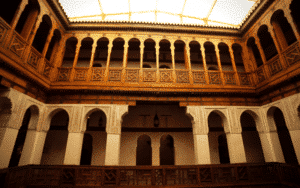 This educational building also known as Medersas in Morocco was completed in 1325 and commissioned by Marinid sultan Abu Said. It was initially built as an accommodation for students of the Quaraouiyine Mosque, but it is currently regarded as one of the beautiful examples of Marinid architecture. The courtyard is a masterpiece with ornate cedar wood carpentry, carved stucco, and beautiful zellij tile works. Also, you will find fine marble columns and Arabic calligraphy which makes it stand out as one of Fez’s must-see places.

7. Pay an early visit to the Chaouwara Tannery 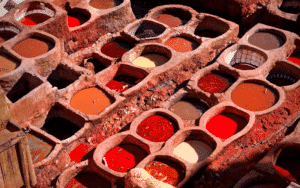 This tannery is considered the largest and oldest traditional tanneries in the leather souk in Fez. It dates back to the medieval period and in this tannery, skins are cured with the use of archaic ingredients like pigeon feces, quicklime, and cow urine before drying in the sun. The sight of the multicolored dyeing barrels in the courtyard makes you forget the pungent smell of the ammonia. You can have a better view of the beauty of the works carried out there by visiting the built-in shops in the surrounding. This can best be done in the morning periods when the barrels are full of dye and you can also buy some leather goods if you desire. 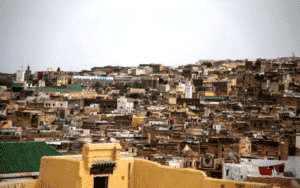 This military fortress was built in 1582 to serve as fortification walls for the city. It is located at a vantage point hosting a beautiful view of the city. There is also a beautiful museum of weapons in it with an extensive collection of the Moroccan military history. Over 5000 weapons are on display which covers various periods in history including encrusted daggers and the 12-ton canon which was used in the 16th in the battle of the three kings. Most of the items there were also donated by members of the royal family.

The Jnan Sbil Gardens is found just outside the medina walls and is considered the oldest and finest garden in Fez. Sultan Moulay Hassan donated it to the public in the 19th century and it now serves as a place of peace and the perfect location to escape from the noise in the medina. You will have the opportunity of meeting locals and other tourists here as you explore the meandering pathways in the park or soak up the sunshine from the central fountains. There is the scent of citrus trees and eucalyptus in the surrounding, with slim palms providing shed on hot days. There is also the café to taste delicious al fresco meals while you enjoy the view of birdlife by the large lake. 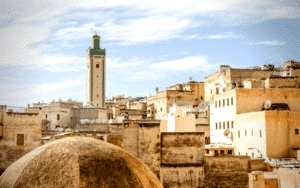 The Dar Batha is located in the Medina and it is a museum that used to be a palace up until 1915. It contains a collection of beautiful traditional artifacts in it. With its beautiful Andalusian-style garden, water fountain and mosaics, and various kinds of aroma, plants, and sounds, it is a must-visit. Inside the museum, you will find carpets, embroideries, ceramic collections, wood carvings, and Moroccan tiles all collections from the 14th century.

11. Visit the Jewish Quarter and discover its history

Also known as Mellah in the local dialect, this Jewish quarter is located in the newer section of the town. It is made up of streets having large houses and vibrant market places. Be sure to visit the 17th-century Ibn Danan Synagogue and also the Jewish cemetery. This part of the city was created back in the 14th century as a refuge city for the jews and also protecting them from the attacks of the Arabians as they were found to be important to the country’s economy. In the beginning, this section of the city was known for its wealth and status but it soon became a ghetto.

Explore Fez , Guided Tour of Fez , Things to do in Fez , Visit Fez

Moroccan Cuisine: All You Need to Know!